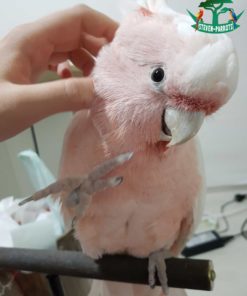 The Major Mitchell’s cockatoo, also known as Leadbeater’s cockatoo or pink cockatoo, is a medium-sized cockatoo restricted to arid and semi-arid inland areas of Australia.

The Major Mitchell cockatoo is a beautiful colored cockatoo. Buy Major Mitchell Cockatoo has white feathers on the wings and the rest of them are a soft pink. The crest looks plain when it is down, but when erect is has beautiful orange and yellow coloring. The bill and feet are bone-colored.

The Major Mitchell cockatoo occurs naturally in Southern and Western Australia. They live in forest areas and do not go to the open field so often. Major Mitchell Cockatoo pairs will not nest close to one another, so they cannot tolerate fragmented, partly cleared habitats, and their range is contracting.

As a pet, It is possible to keep this species of cockatoo as a pet in your home, but it is not common. They can become just as tame, affectionate, and loving as any other species of cockatoo, but they need to be socialized well. If they are not correctly socialized and tamed when young, they will never become really tame or affectionate to humans. This species is also extremely hard to breed in captivity and generally needs a very large aviary. This is why this bird is more seen in bird parks and zoos than as a pet.

Often called a pink cockatoo due to its soft pink body coloring, Major Mitchell’s cockatoo is in fact named after Major Sir Thomas Mitchell, who was a surveyor and explorer of Southeast Australia during the 1800s. This beautiful cockatoo’s most distinctive feature is its white-tipped crest, which is banded red and yellow at the base. The wings are generally white with a darker pink underside. The birds grow to 36 cm long ( large cage) , a medium-size among cockatoos. Living in small groups or pairs, they have also been seen with flocks of galahs and little corellas. 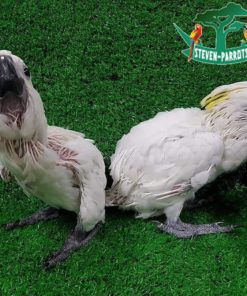 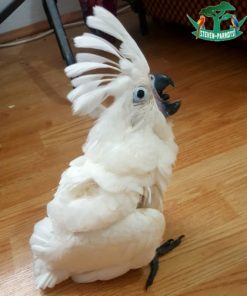